Dan Brock’s online course written in 2015 teaches that boosting traffic with Fiverr is the most effective way to drive traffic. This post explains how I tested it and confirmed that it still works to this day but beware things have changed and the method may hurt you.

I stumbled Dan Brock after researching “Affiliate Marketing” on Youtube. He goes by the name of the “Deadbeat Super Affiliate” His brand is entertaining because he claims that making money online is so easy that you have time to eat Captain Crunch and sit in a lazy boy all day. His flagship product is an online course educating you on how to use the blog method (squeeze page) for catching and selling visitors.

The course only costs $17 bucks, which is extremely reasonable considering other courses cost around $300 to $500 and up.

After signing up for the course, the first thing you realize is how he does it. He provides a high-value product at a low price. After you buy the online class and trust has been established he upsells you more product. This technique is important to realize because it’s easy to sell to customers who have already bought from you. It’s one of the reasons why email list building is so important.

The first chapter work philosophy woke me up. Dan Brock makes it a point to AVOID TELLING YOUR FAMILY WHAT YOUR DOING. The thinking is that family will tell you that you’re crazy and that making money online is a waste of time. This negativity won’t help you. This thinking resonated with me and I agree with his point.

The Critical Part of the Course is
Boosting Traffic with Fivver. BEWARE!

This traffic creation system is his way of driving traffic to the site per his 2015 course. Google Adwords are too complicated and expensive so in his opinion, boosting Traffic with Fiverr is the best way to get the rank for beginners. It’s cheap at $6 to $24 per post but beware things have changed and this method is officially “Black Hat”.

The Course Was Written in 2015 – It Freaked Me Out

The first thing I noticed was that the course was written in 2015. I was concerned that boosting traffic with Fivver would send a negative signal to Google. Could it be that Dan Brock’s tutorial still works in 2017?

My Method to Test the Waters

My solution was to use scottfichter.com as a Guinea pig. If boosting traffic with Fiverr at this site gets me punished it won’t matter. 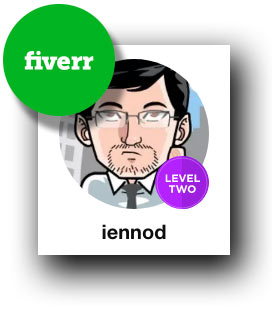 I had decided to attend the Lancaster Gatling Gun Shoot, so when I visited the event, I took video and wrote up a super cool blog post about it. I then signed up with Fivver and found iennod which is

the very same guy that Robert Piercy used who is an avid Dan Brock follower. I noticed that Rob’s videos also reviews boosting traffic with Fiverr. His videos show proof of his success with Dan’s Fivver traffic boost system.

Robert Piercy’s helped me because he demonstrated proof of his success with Dan Brock’s system. Here’s Rob’s working affiliate website created from Dan’s tutorial.  I created the needed spin tax file and submitted to iennod for a single Fivver gig per Rob’s video below. I waited three or four days and checked my site stats.

Rob the Super Affiliate Student also conveys this in his later posts. STAY AWAY FROM THIS METHOD.

After waiting a few days, I received iennod’s site submission report. I immediately logged into scottfichter.com, and to my surprise, the traffic to my site increased dramatically. A few more days passed and my keywords “Scott Fichter” and “The Lancaster Gatling Gun Shoot” also lowered in the Google rank. The system worked as promised and Dan’s tutorial is still effective after close to three years.

Boosting traffic with Fiverr is not a great way to get started with affiliate marketing. The only hurdle is that you MUST blog and blog hard. Interesting and useful blog copy makes money. Get Dan’s course, and he will explain techniques to Funify your text, so folks are more motivated to read your information. There are other techniques he mentions in his course so sign up and find out how to do it.

At $17 Bucks There is Little to No Risk.

So what are you waiting for? $17 Bucks is all it costs. That’s nothing. Dan Brock’s course is THE best introductory affiliate marketing course out there. Don’t over think it like me. Learn from my testing.

Now (not later) is the Best Time to Start

Time is not your friend! Everyone is getting involved with affiliate marketing and the product niches are getting owned by aggressive bloggers every day. Stop thinking and start acting.

I wish you all the luck with your venture.